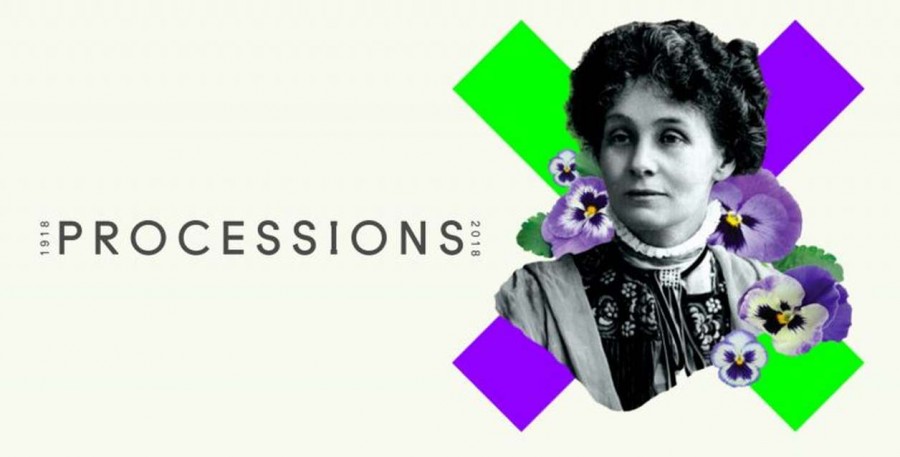 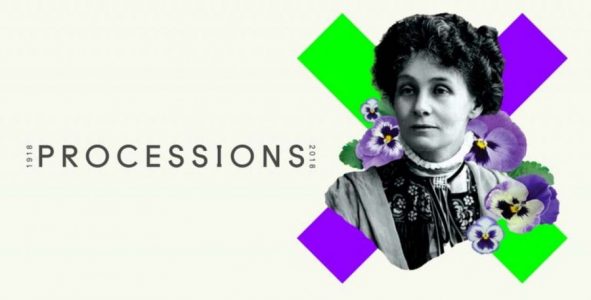 We wanted to involve OVADA’s associate artists and asked them to provide black and white images of strong women, through their families, as the starting point for the banner. 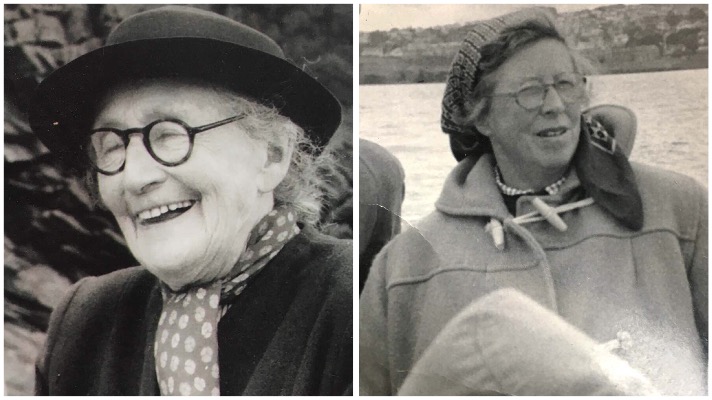 We held the workshop on a day during the Dawn Rose Red festival as a drop in for associate artists to contribute towards the making of the banner. They embroidered letters, painted the background, stitched and ironed. 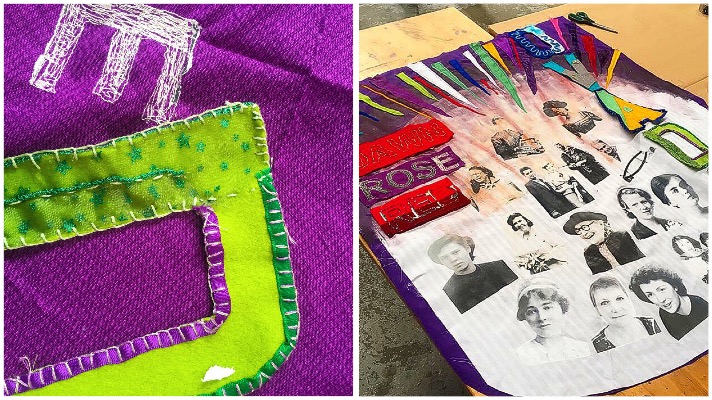 On 10th June we took the processions 2018 banner to London. Over 30,000 women marched from Hyde Park to Parliament Square.

it was an amazing day to be part of and I am very proud of all the hard work that was put into our fantastic banner. 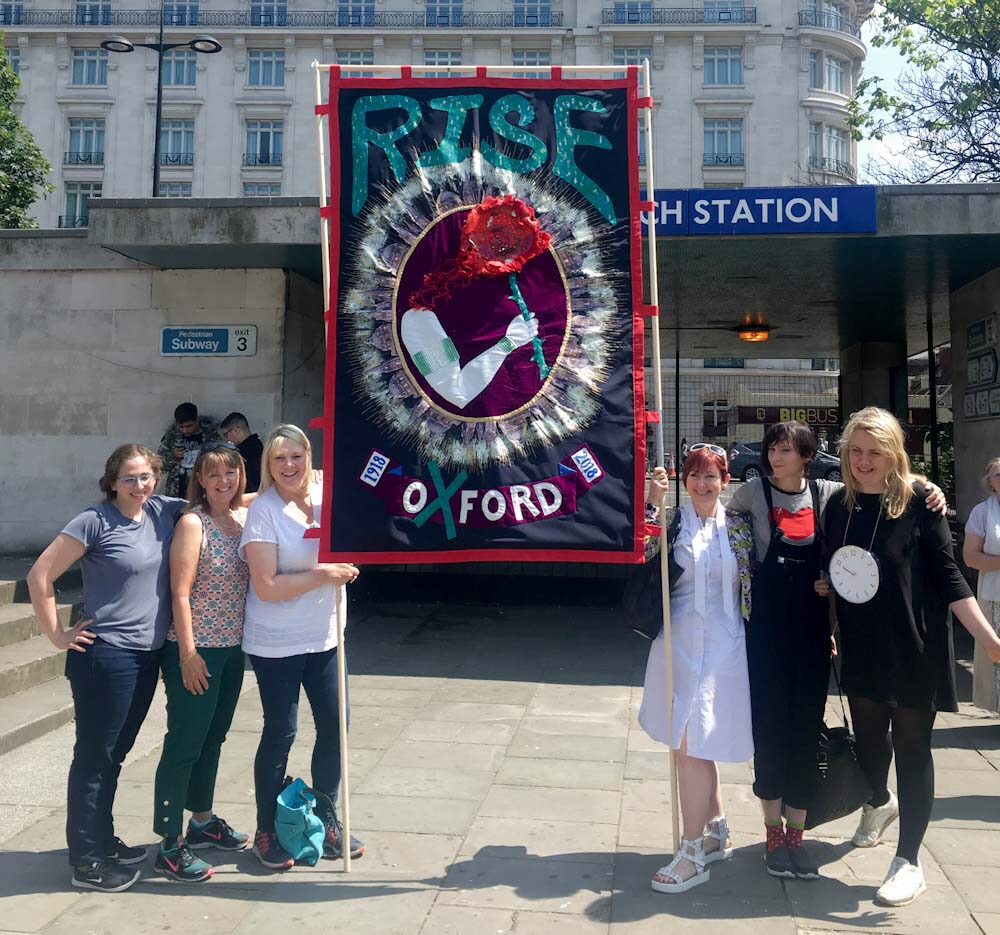 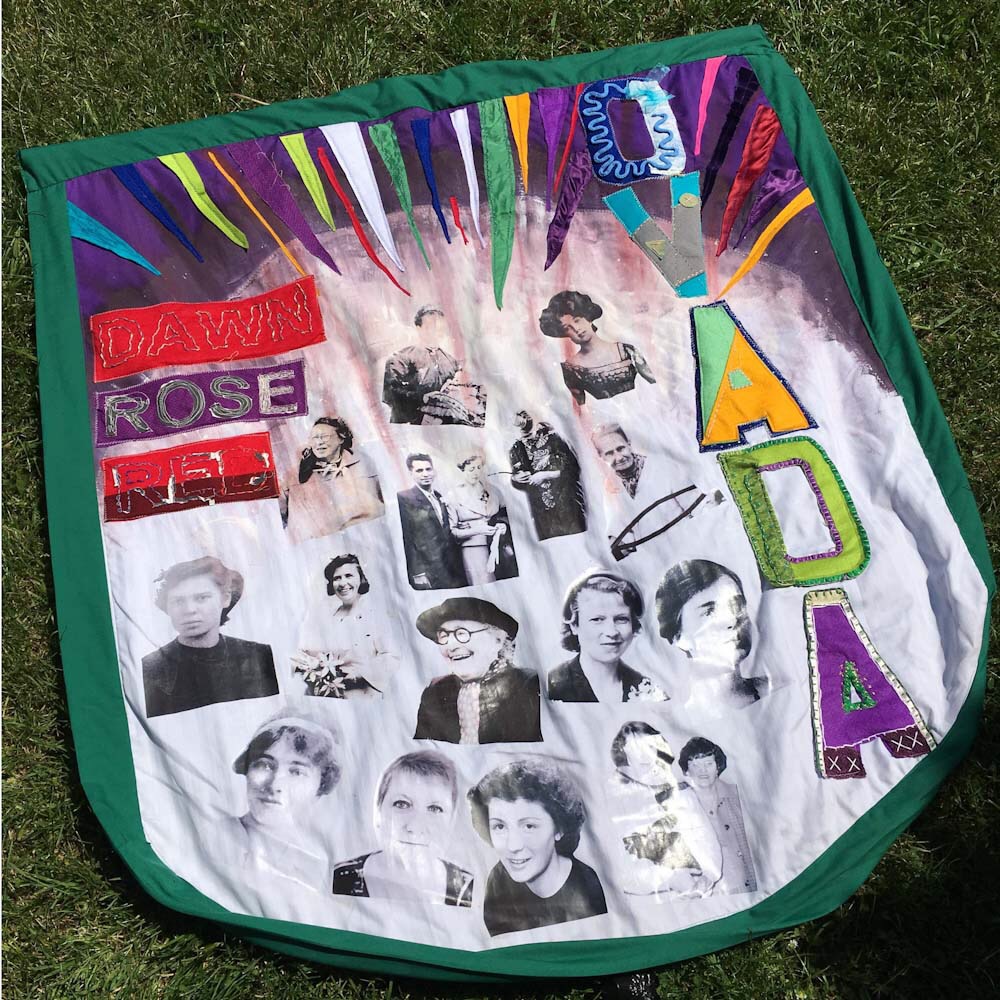 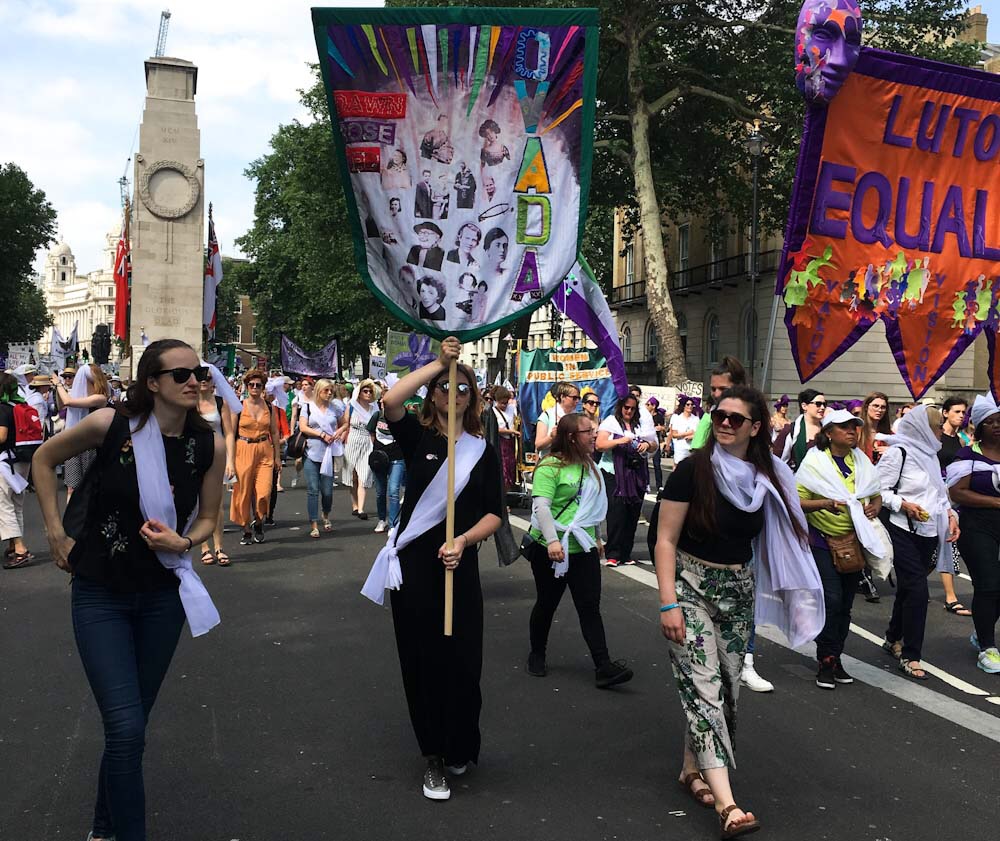 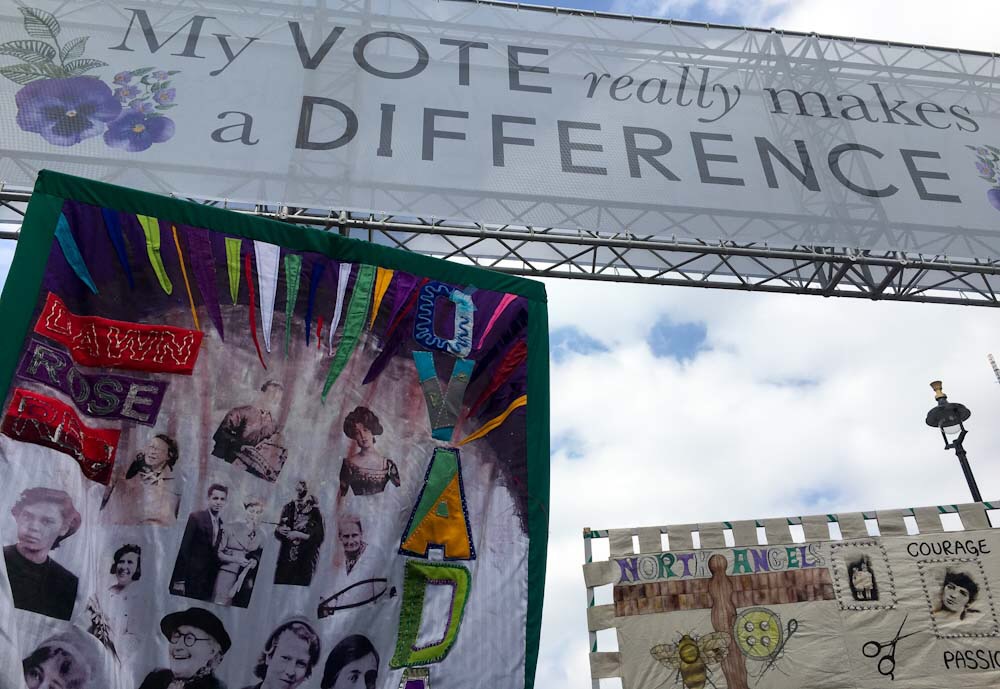 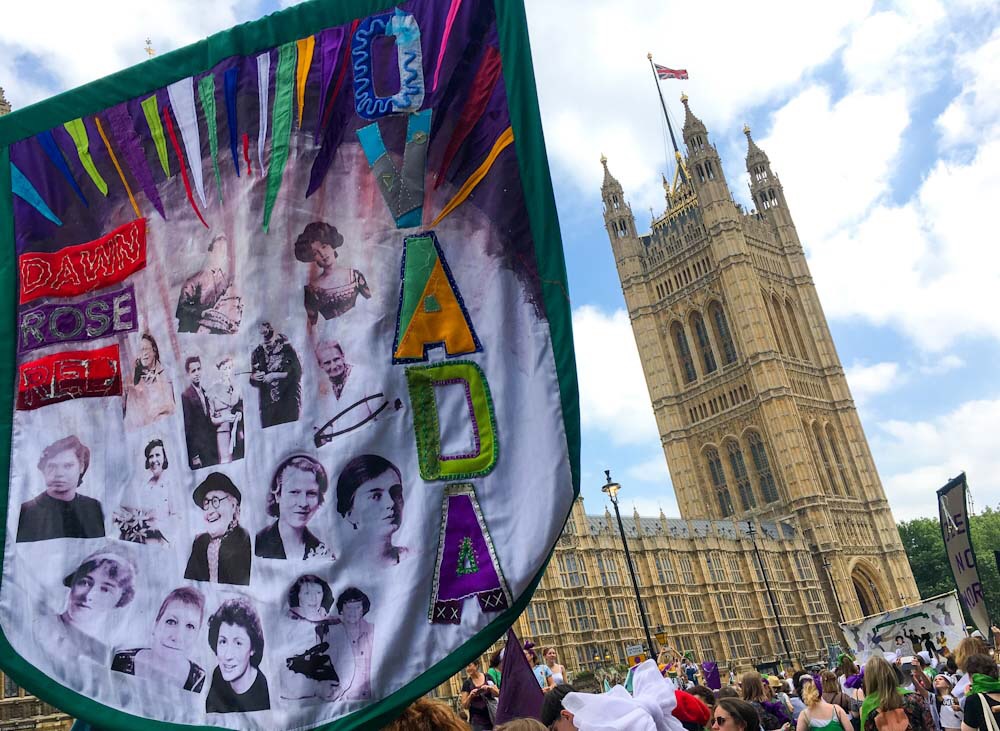 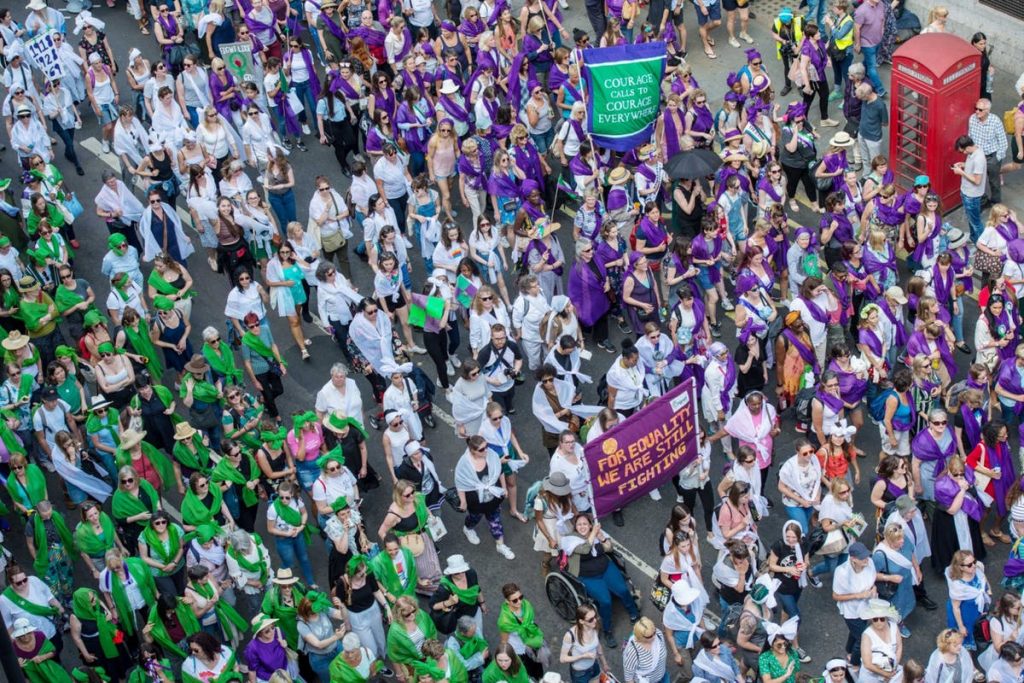 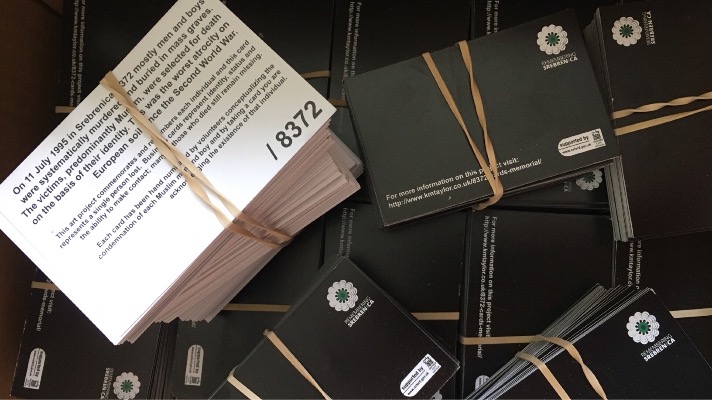 I am excited to have had Funding granted for a Srebrenica Memorial by Oxford City Council. 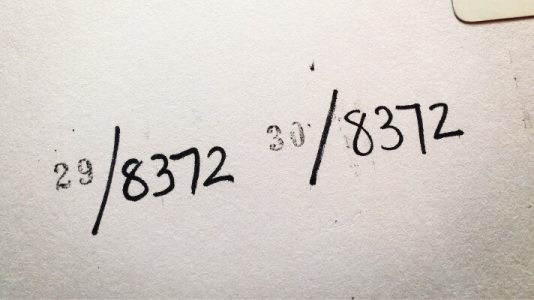 For this project I will print 8372 business cards, that will be individually numbered/editioned 1/8372, 2/8372 etc on one side. The other side of the card will have a brief paragraph explaining the history of what happened at Srebrenica in 1995 as well as an explanation of the piece of  work.

These business cards remind us of each of those people killed without actually naming them. Business cards represent identity, status and the ability to make contact, many of those who died still remain missing.

The process of numbering will be an important act. I intend to host a two day event within the project space at Magdalen Road Studios and invite artists and members of the public to participate in the numbering of each of the 8372 cards. Each of these volunteers will conceptually represent the perpetrators, condemning each of the individual victims. This process will engage each volunteer to consider more deeply the events and actions of 23 years ago.

Srebrenica Memorial week runs from the 8th to the 15th July. I am hoping to exhibit all of the cards in their entirety at the Town Hall in Oxford from 8th to 11th July. Then from the 11th July  I will begin to hand out these cards within public spaces metaphorically exhuming each of the individuals and acknowledging their existence. This will be an act of remembrance that will help to raise awareness and remind us all of the consequences of hate.

I will continue to document the process here as well as on my social media channels. 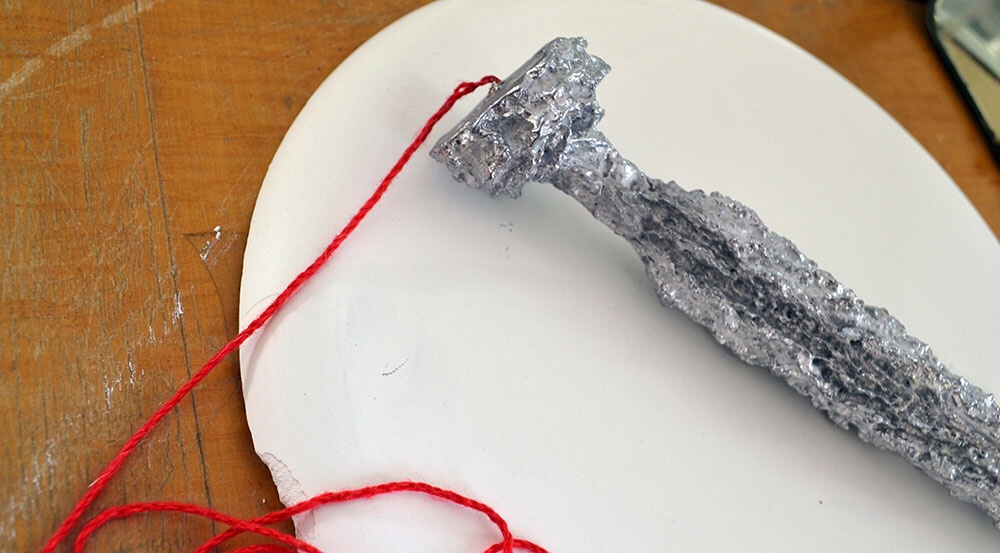 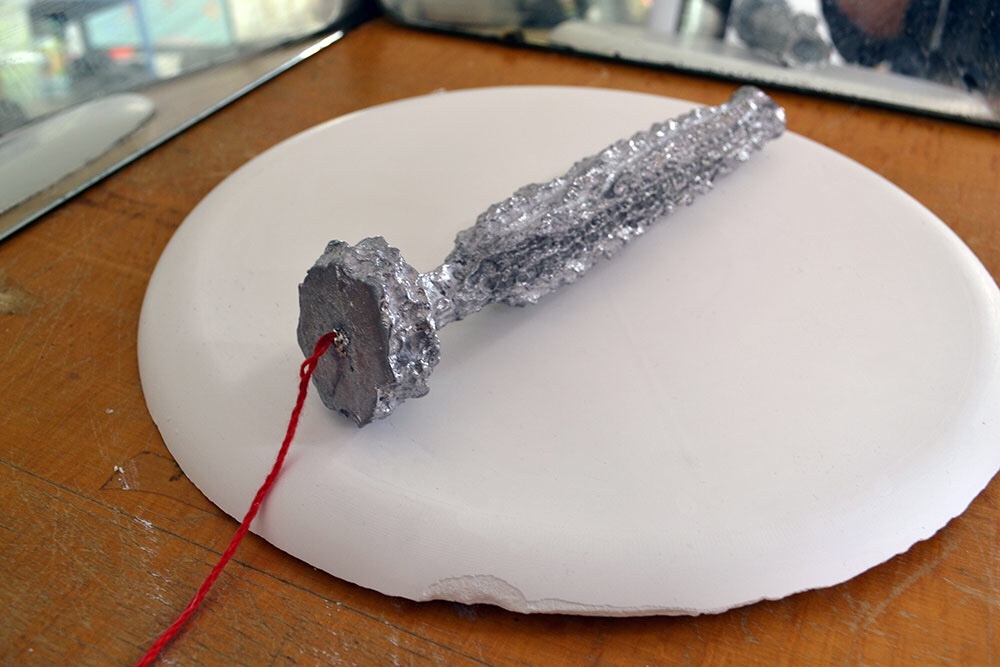 Whilst working on this current piece, I have been aware that the artistic process itself has become as important as the initial ideas and the finished piece. Almost like a performance piece the act of making has added meaning to the finished work.

Whilst tearing the strips I considered who had actually torn the fabric for the Serb army. Whose job had it been to create the blindfolds and fabric ligatures? Had they considered and known of their intended use?
I do know that some of the blindfolds and ligatures were possibly scraps from a manufacturing process, these were collected and used in bulk. Others however would have had to have been produced. 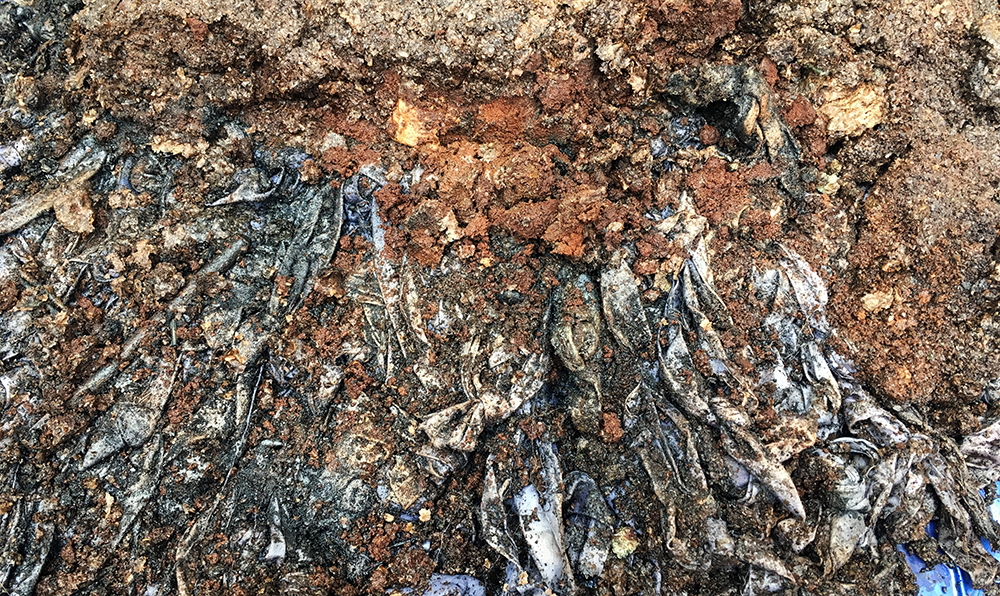 To dye and stain the knotted fabric, I have used waste coffee from a local cafe ‘The Missing Bean’ along with a combination of other dye stuffs and rusty iron. The whole piece was left for a week and was then uncovered to discover the effects.

This uncovering had a very visceral sense of exhumation. The act of burial was an important aspect of the process for this piece of work, but the uncovering too became important as well.

It is these aspects that often only become apparent during the artistic process itself and aren’t always part of the planning.

For this piece, particularly, the importance of these elements is poignant. A whole new level of conceptual meaning has been added. 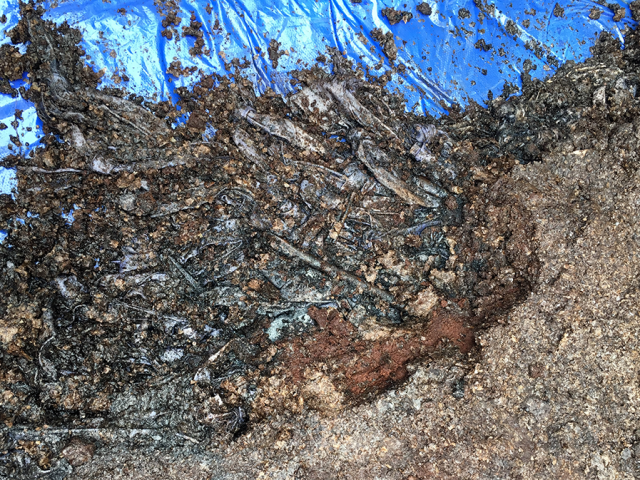 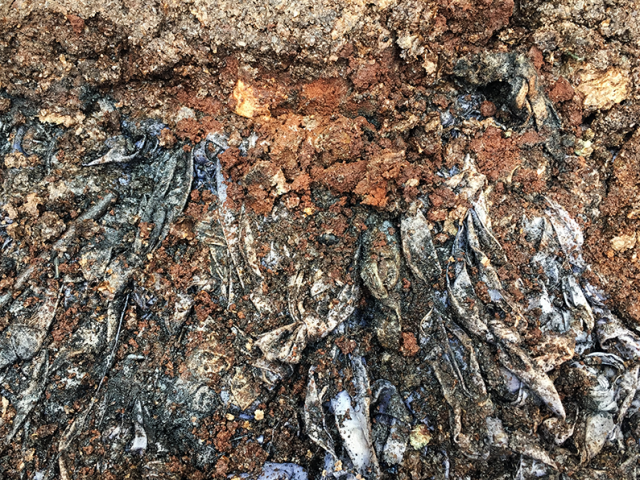 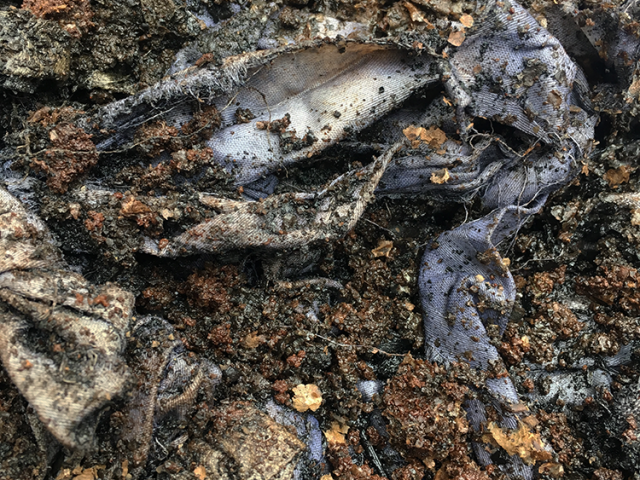 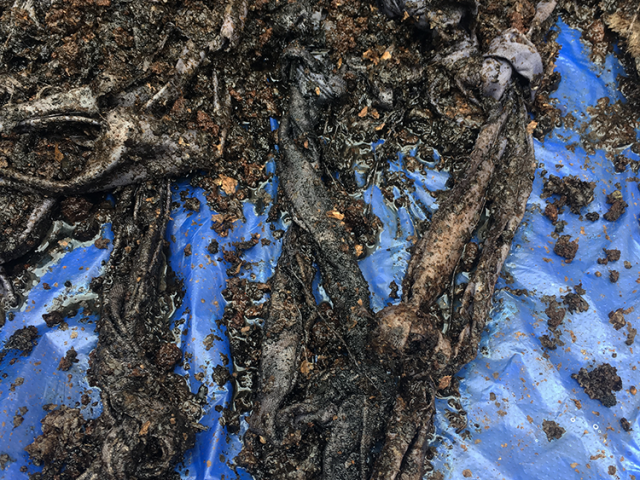 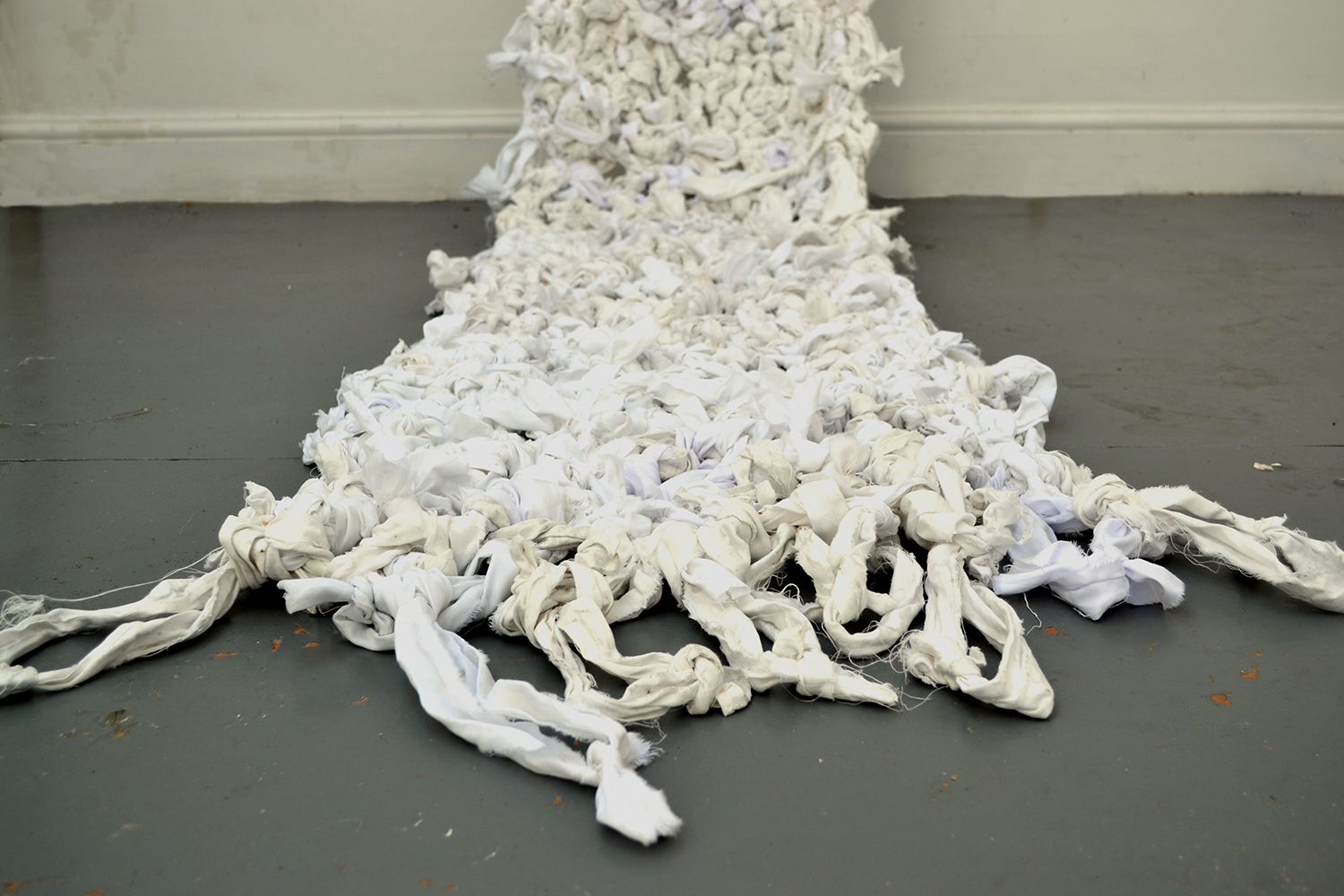 Developing ideas from research I have started to tie ideas about Bosnia’s blindfolds together.

I want the ideas to act rather like a timeline within the piece:

Within Mass graves, forensic anthropologists found many blindfolds and ligatures. It was noted that many appeared to be very similar. Sent away to a forensic lab in  The Netherlands, Chemist S. E. Maljaars drew up a report for the Criminal Tribunal in The Hague.

In her analysis, the Dutch forensic expert showed that the bodies from the primary grave, where the victims executed at that location were initially buried, were transferred to several secondary graves. The pieces of the same fabric were thus found in two or more locations.

The evidence also helped to prove a level of organisation during events and therefore was part of the evidence that proved Genocide rather than mass murder.

This piece is ongoing as I develop it further. I intend to continue with the knotting as well as dye it with coffee grounds and iron.

After attending the ‘Remembering Srebrenica’ conference in Oxford a few weeks ago, I applied for their visits program.

I have become ever more excited about the possibility of organizing an exhibition that continues and extends the ideas I started to work on for ‘latent‘. The potential to explore these themes further whilst also extending the ways of remembering in a creative visual way is really exciting too. I think the potential is huge and also very exciting.

I found out last week that I have been selected to visit Bosnia and Herzegovina with Remembering Srebrenica on one of their ‘Lessons From Srebrenica’ visits. I leave next week and I am very excited!

The program enables interested individuals the opportunity to learn first hand the awful events that happened in Bosnia, meet survivors and visit key sites. In return delegates pledge to do something to share their experiences and educated groups back home.

I am looking forward to my visit and I’m really excited to develop a new project.