This opportunity to visit Bosnia and get a sense of the country is huge for me, after all the research I have been doing I am really hoping to pick up seeds of new information to inform and develop my practice.

We were a small delegation of 5 people with Amra Mujkanovic from Remembering Srebrenica as the delegation lead.

We flew from Luton to Tuzla, and on arrival we had a minibus trip through mountains to Sarajevo staying in Hotel Hollywood, Sarajevo.

Our first days visits started with a trip to the Tunnel Museum in Sarajevo. Our guide Resad Trbonja gave us a fascinating talk on the minibus first, explaining the History of Bosnia and Herzegovina right up to the 1990’s. Resad was a teenager when the war in Bosnia started and was living in Sarajevo at the time. To protect his city he fought on the front line during the siege of Sarajevo, an event that took 1,425 days from 5 April 1992 to 29 February 1996. His first hand experience during the war included using the tunnel.

The Tunnel was a 800m in length 1m wide and 1.6m high. It was built by hand beneath the airport runway that was under tenuous UN control, eventually equipped with rails to transport food and arms this was a lifeline for the city.

After the Tunnel Museum we visited the Museum of Bosnia and Herzegovina. Within this museum there was an exhibition dedicated to explaining what life was like for people living in Sarajevo at the time. One of the most poignant exhibits was a knitted jumper worn by a small boy who had been killed. 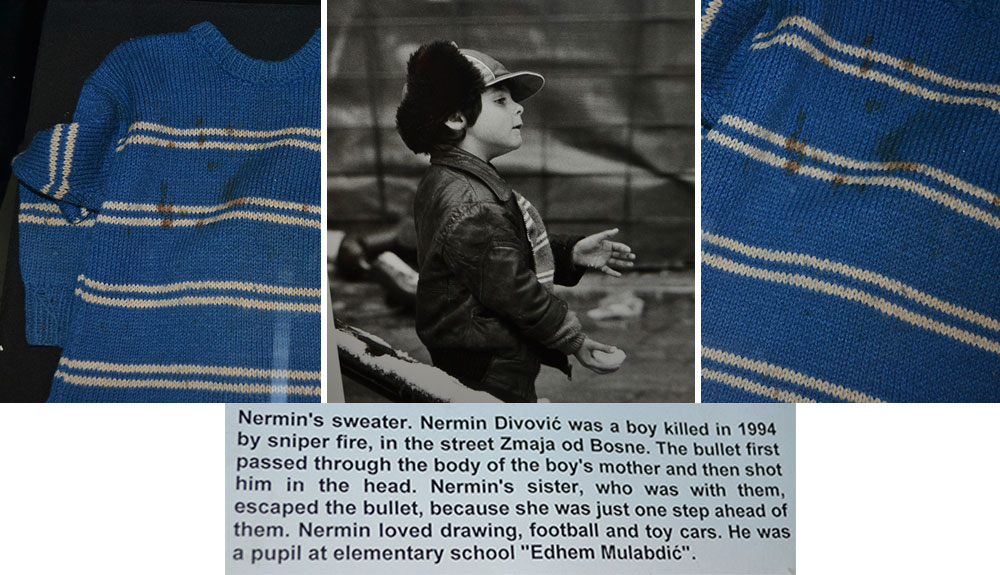 After lunch we visited Galerija 11/07/95, a space I was really excited to visit! It is the first memorial museum/gallery in Bosnia and Herzegovina and has a permanent photography exhibition that aims to preserve the memory of the Srebrenica tragedy. Displayed in black and white the images provide a starkness that bears witness to the events surrounding Srebrenica.

A fascinating first day ended with a drink in the bar and dinner at the hotel with time to gather thoughts before bed.