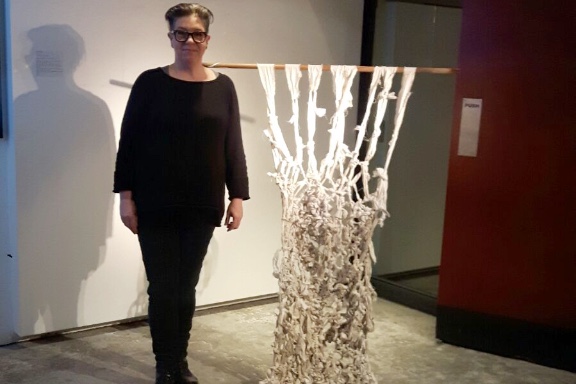 Last month I was selected as the Remembering Srebrenica Community Champion of the month for February. I am really excited and extremely proud of this recognition.

“Each month the team at Remembering Srebrenica selects a ‘Community Champion of the Month’ to celebrate the inspiring work of our fantastic supporters across the UK. Community Champions for the 11 months preceding July will be invited to light a candle of remembrance at the UK Srebrenica Memorial Service in July.

We are delighted to announce that February’s Community Champion of the Month is Katie Taylor!

Katie is a contemporary textiles artist from Oxford who attended a ‘Lessons from Srebrenica’ delegation to Bosnia last year. Her work was shown in a recent exhibition, disPLACED, which took place at the P21 Gallery in London, and showcased her powerful and thought-provoking new piece, ‘Lie Down’. Over the course of three weeks, hundreds of people had the opportunity to engage with Srebrenica thanks to her work.

‘Lie Down’ was a thoroughly creative and original way to get people to think about the horror of genocide. The piece, made by rags soaked in coffee, represented the countless ligatures used to detain prisoners and echoed the white armbands that Bosnian Muslims were forced to wear, while its height of 150cm references the height at which boys were sent away with their fathers. Katie said that the act of ripping up material made her ask herself, “Whose job had it been to create the blindfolds and fabric ligatures? Had they considered and known of their intended use?” By examining the genocide in this way, the audience were invited to think about those who are complicit in genocide. Images of ‘Lie Down’ can be viewed here and Katie also plans to mark Srebrenica Memorial Week with a new exhibition.

Everyone at Remembering Srebrenica would like to thank Katie for her hard work in using her talent to bring the lessons from Srebrenica to a whole new audience.”