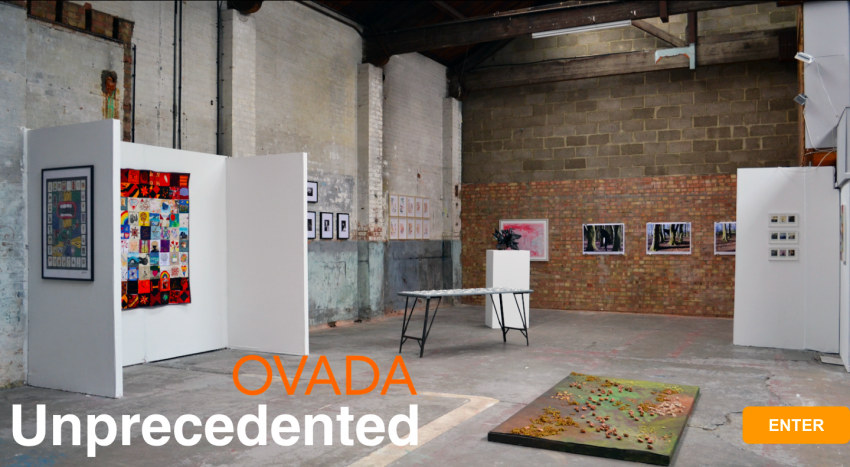 The Unprecedented Covid Exhibition was an exhibition of collective work created during and in response to the Coronavirus pandemic. I curated the exhibition alongside Curator Sarah Mossop. It was presented as a virtual gallery space and youtube walk through as well as opening to the public as a physical exhibition on 21st May 2021.

The OVADA ‘Covid Quilt Project’ was at the centre of this exhibition as well as a digital quilt created by Art Refuge by groups of people who have been displaced.

The Unprecedented Exhibition was part of Oxfordshire Artweeks and was a celebration of the gradual reopening of art spaces, showcasing the resilience of all artists and arts organisations. 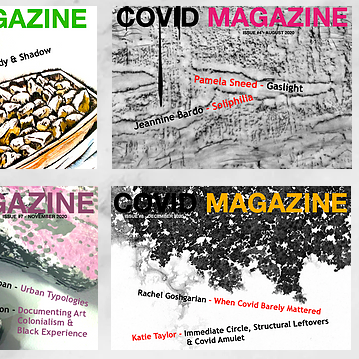 To see more or order a copy – https://www.teleocene.com/covid-magazine-1

“Issue #8 of Covid Magazine is dedicated to the devastating subject of genocide and ethnic cleansing. For text, I invited an old friend, a scholar of the Ottoman history and an activist Rachel Goshgarian. I met Rachel back in fall 2002, at Harvard, where she was doing her PhD in Ottoman history. Over the years we encountered each other on numerous conferences. During the lockdown she became for me and many others the primary source of information regarding the atrocities against the Armenian community in Nagorno Karabakh. I decided to couple her text with Katie Taylor ‘s work, the only artist I know who once described her work as forensic art. She is a sculptor based in Oxford, UK, whose work is mostly inspired by the Bosnian genocide. Her art exposes the fragility of life, focusing on anthropological remains forensic scientists find in crime scenes associated with ethnic cleansing.I am truly grateful to both colleagues for participating in Covid Magazine which is slowly evolving into a site of textual/visual witness.”

Previous issues feature the works of: 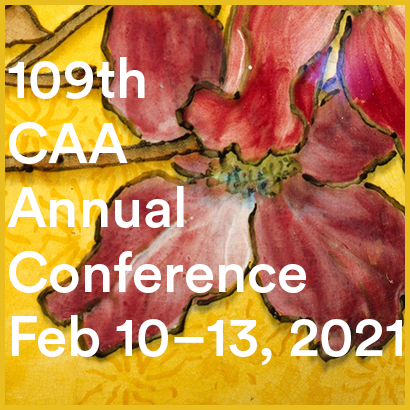 I will be talking as part of a panel discussion at the CAA Conference on February 13, 2021

In this session for the CAA Conference, artists and educators using biodegradable materials are invited to present their work and their process. The focus is on artwork made with materials grown in-house or locally, or obtained through waste collection or foraging, that can be composted in personal or municipal facilities. Examples may include mycocomposites or mycofoam, kombucha leather, bioplastics, recycled paper pulp, or bio-based colorants.

Presenters will discuss how the life-cycle analysis of materials contributes to the conceptual framework of their practice,

How might art reflect the necessary shift away from a destructive linear economy to refocus on a circular economy?

The question of the archival of materials and the possibility of reframing a limited life-span as an asset will also be addressed.

Presenters will talk about the interdisciplinary nature of their projects: how they intersect with design, architecture, agriculture, biology, or material science for example, and how this might be utilised as a pedagogical cornerstone.

Chaired by Nichole Van Beek and the Panel includes the following artists:

You can visit the ‘Vanishing’ exhibition here 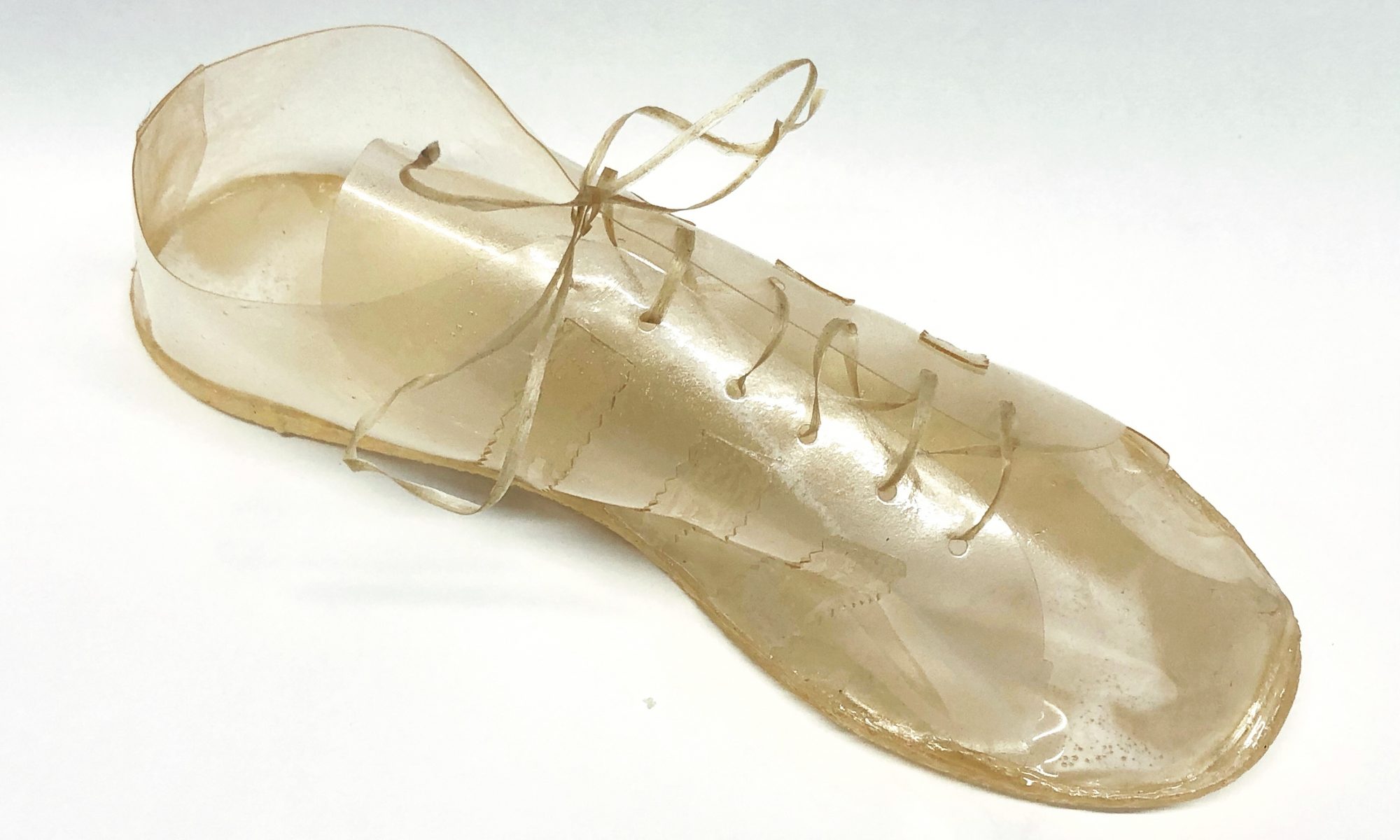 I have previously explored bioplastic as a material within my work and because of the biodegradability of it as a material it became an interesting material for the exploration of unidentified human remains. Gelatine is a biopolymer that is typically a waste product from the food industry. When mixed with glycerine it produces a fairly robust clear, sheet material. Gelatine is bodily, it is made from pig collagen sourced from skin, bone and connective tissue. Gelatine as a product also directly references forensics because pigs are used in the UK to train cadaver dogs because they are the closest animal proxy to the human body.

Gelatine Bioplastic is transparent, ephemeral and malleable, and easily made in a home kitchen. Because of its transparency it has a ghostly appearance, a physical embodiment of what is missing, barely there. Bioplastic is biodegradable, slowly breaking down just as our bodies would and becoming part of the immediate surroundings, and like us it is made predominantly of water that slowly evaporates as it dries. Evaporation is also ghostly; moisture is held in the air as it evaporates but remains unseen. These references to the unseen also directly evidence the unseen in society – the lonely, the homeless or outsiders as many unidentified people inevitably are.

With some experimentation I have developed a way of making clothes and shoes from gelatine bioplastic. Clothing and shoes represent the people who once owned them. We choose what to wear each day, to both fit in or stand out, these are conscious decisions that define us and determine how we are perceived to others. These items are also used to help with the identification of an individual. As previously mentioned, belongings and items of clothing are listed within the entries on the missing persons database. Clothes are often kept after the death of a loved one, ‘as a point of material contact with the body of a once living person. They thus provide a means by which memories of that living body can be generated.’ (Hallam and Hockey, 2001) Clothes and shoes are vessels or containers, a reliquary that remind us who they belonged to and ‘is so ‘potent’ because it exists as material that is both familiar and other: it is a materialized extension of the embodied person and the material mark of their death.’ (Hallam and Hockey, 2001)

Shoes particularly explore transience or movement from one place to another, from one city to another, from life to afterlife, from existence to no longer existing. The saying ‘If the shoe fits’ refers to something being the truth about someone and of course Cinderella was identified because of a shoe! 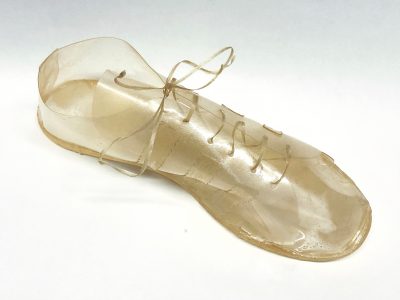 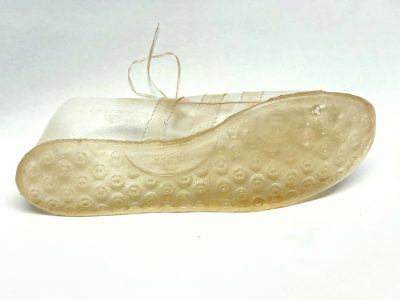 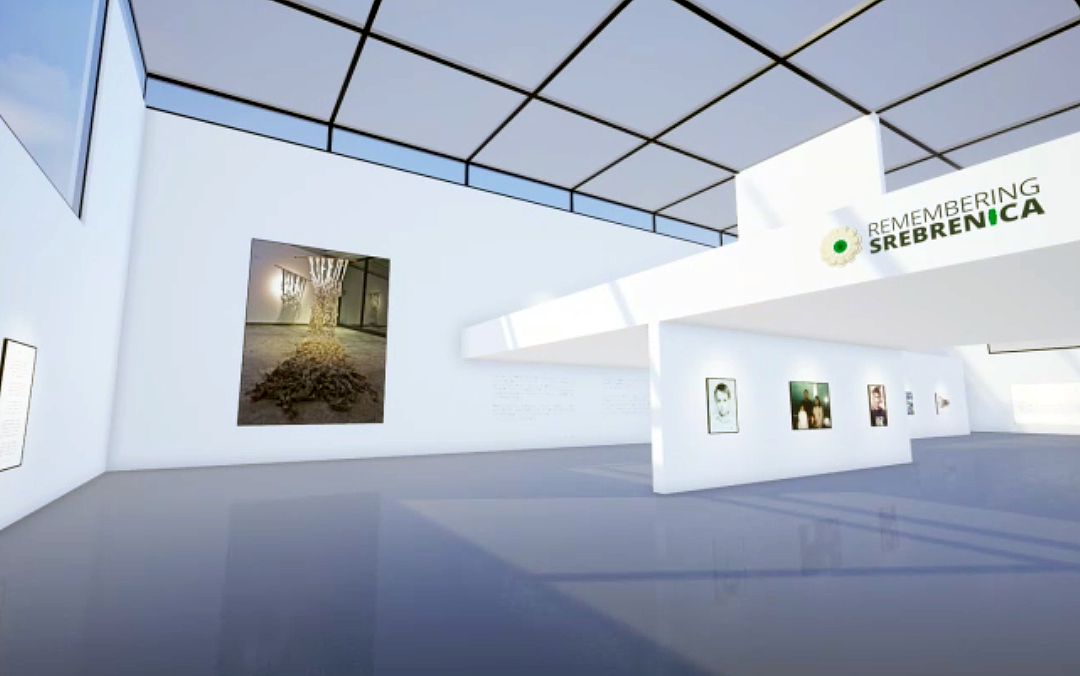 2020 marks 25 years since the Srebrenica Genocide. Remembering Srebrenica has launched a virtual museum.

I am honoured to have my piece Lie Down included within this moving exhibition as a reminder that this should never happen again.

During the same week ‘Lie Down’ was also exhibited within another exhibition held by YMCA North Staffordshire . 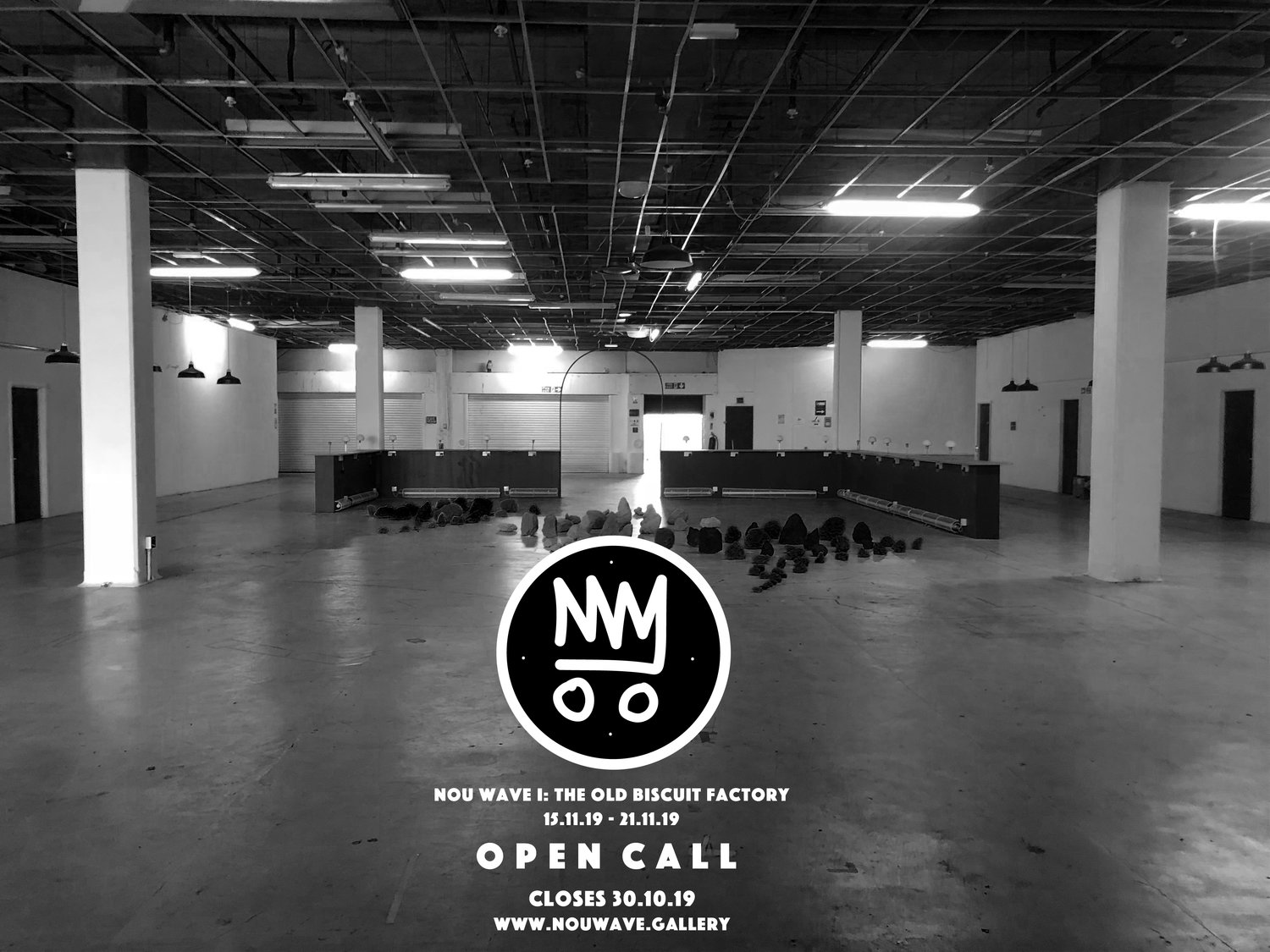 Divided has been selected by Nou Wave gallery to be exhibited at The Old Biscuit Factory from 15th November to 21st November.

Nou Wave is a pop up gallery focused on elevating the most exciting artists in the UK. 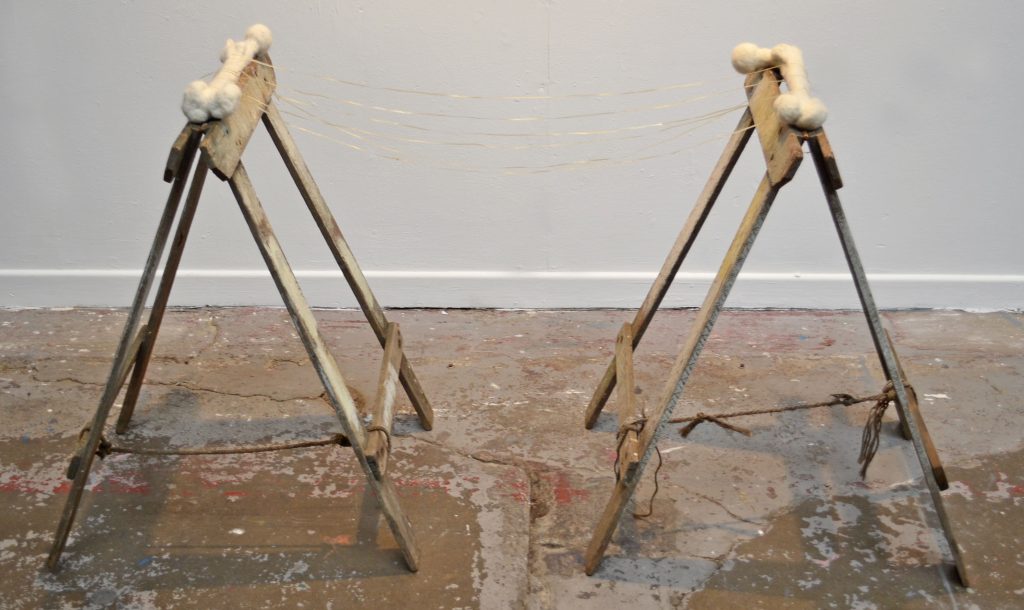 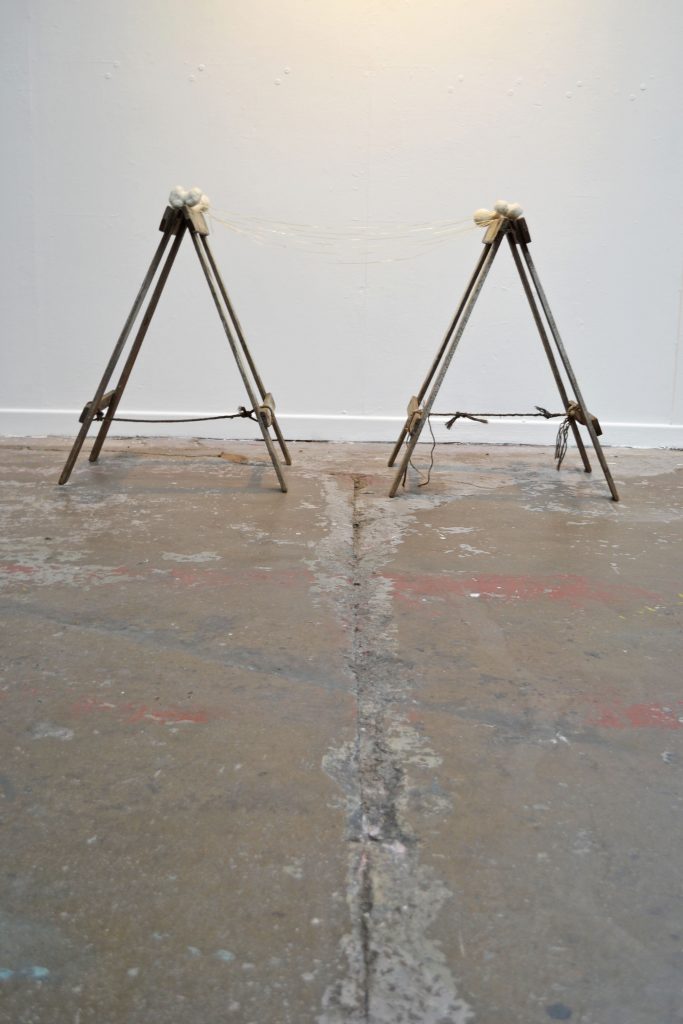 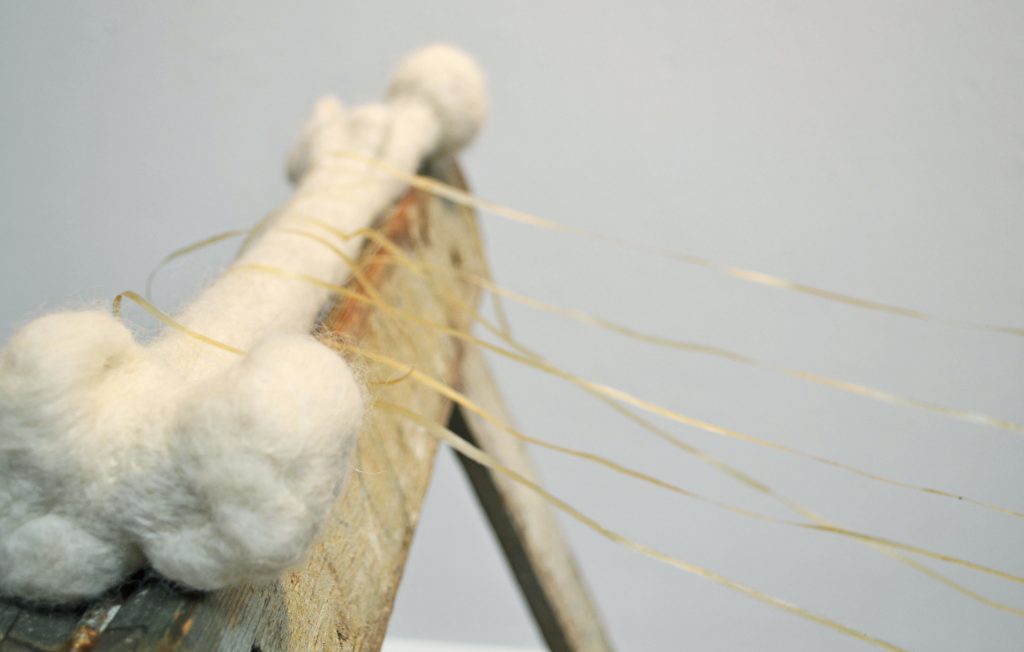 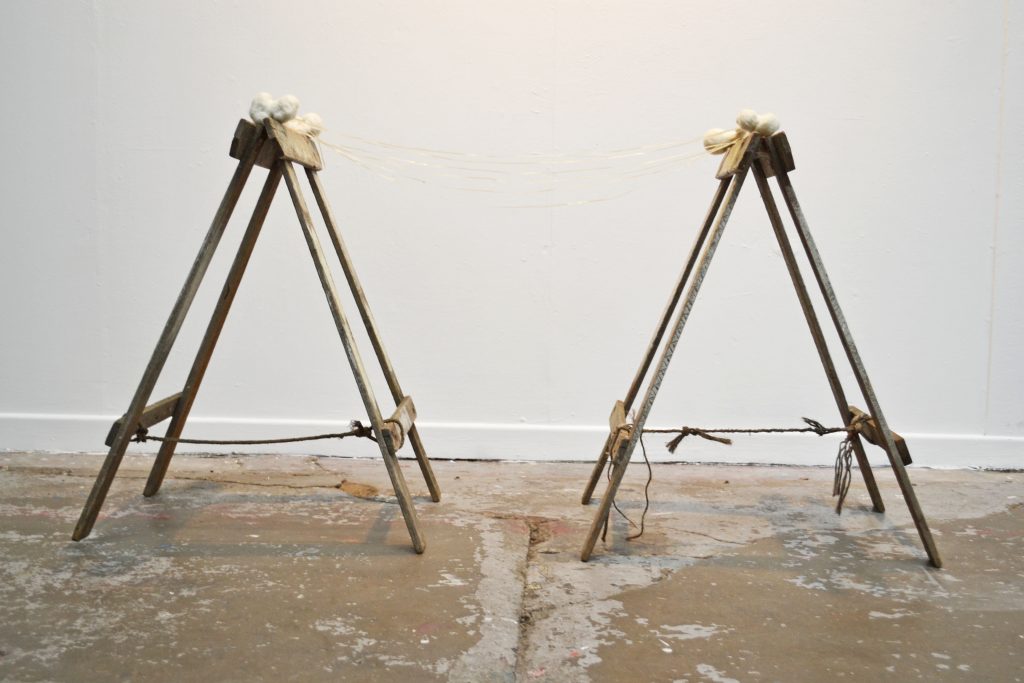 “Nou Wave” is a fact finding mission to find the next wave of great artists living and working in the UK. We celebrate creativity in all of it’s diverse forms.

We accept everyone. We have no qualms about questioning the status quo.

We challenge the conventional wisdom of a white wall gallery by asking: what else could go in there?

‘Lie Down’ was exhibited at Lincoln College Oxford for the Conflict and Identity Conference 17th – 18th October.

I also spoke about my work during the conference 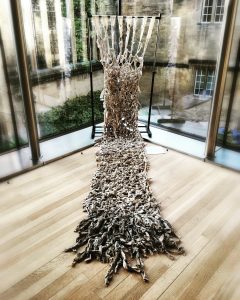 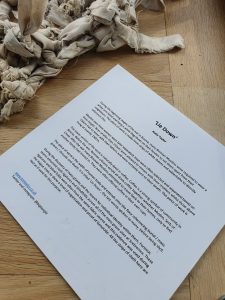 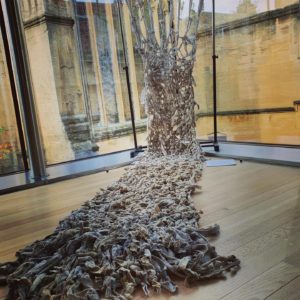 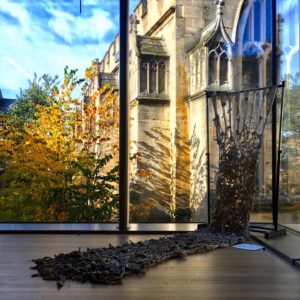 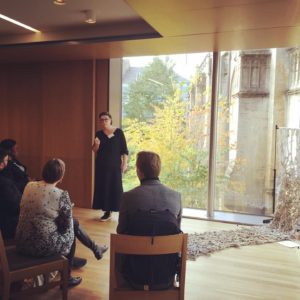 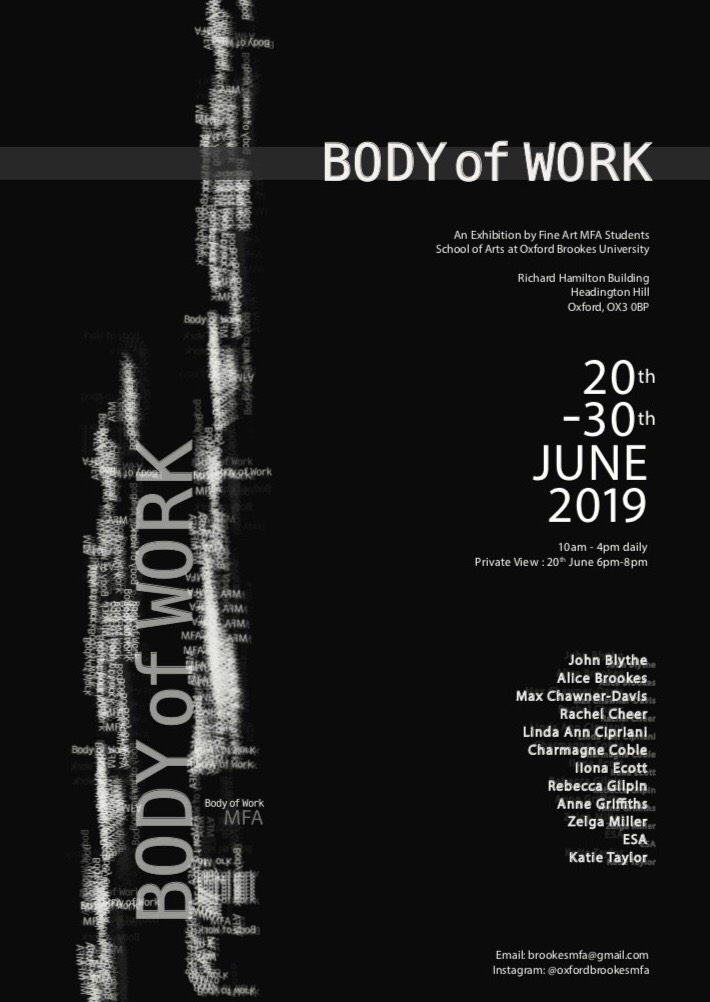 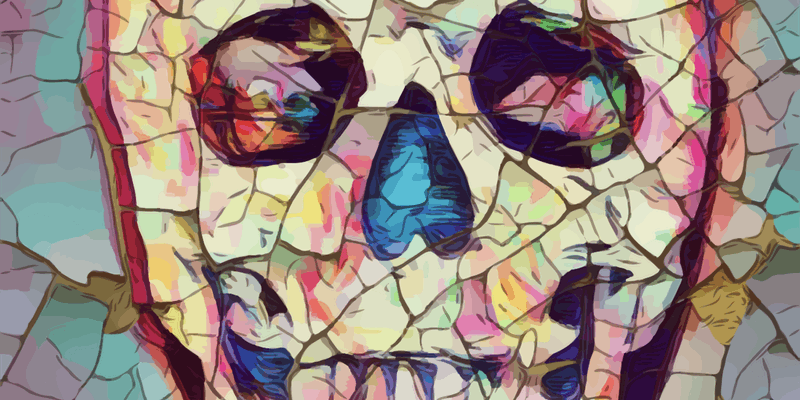 I will be speaking at the one day symposium ‘Interdisciplinary Approaches to Corpse Work‘ event in June about my research surrounding cloth and clothing found in mass graves.

My research explores fabric and clothing found in mass graves which has evolved into interdisciplinary sculptural installation artwork. Memory, individuality and identity is indelibly left behind within materials and belongings including our bones. In this paper I will discuss how my research develops into artwork exploring identity and individuality. I will show examples of my work to date as well as exploring the themes that I propose to continue to research within a PhD next year. Textiles and clothing are often part of the primary tools used to identify human remains after atrocity. In Rwanda people had made their own clothing making it very personal and individual. In Bosnia, particularly Srebrenica, people had not been able to leave the enclave, and resorted to making and repairing their clothing. In Iraq, many people began to sew their identity documents into secret pockets within their clothing. These identity documents were later vital for the identification of the dead. The fabric used as blindfolds and ligatures, in Bosnia Herzegovina were consistent across many mass grave sites this evidence was part of the proof that events at Srebrenica amounted to genocide. Fabric is an important part of identifying these individuals and it is this research that has formed the basis of my artistic practice for the last 3 to 4 years. I have explored evidence of fabric found within Mass Graves predominantly within Bosnia but also other countries including Kosovo and Iraq. Borders too are an important element for my exploration, the borders between countries as a touchpoint for conflict, but clothing and skin, life and death, homeland and refugee are also borders. This work has evolved through my undergraduate degree in Textiles for which I was awarded first class honours, and into my current MFA (Master of Fine Art) at Oxford Brookes University.

The supporting booklet can be downloaded here.